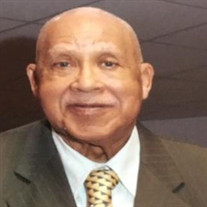 BIOGRAPHY OF THOMAS LEONARD SMITH Thomas Leonard Smith entered into Eternal Rest on Monday, January 17, 2022. Thomas was born in Asbury Park, New Jersey on May 14, 1936. He was the third of eight children born to his mother,... View Obituary & Service Information

The family of Thomas Leonard Smith created this Life Tributes page to make it easy to share your memories.

Send flowers to the Smith family.