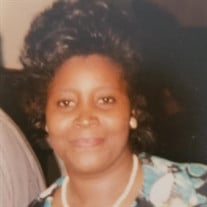 God in his infinite wisdom called his servant Ruby M. Stephens Johnson home to be with him. She passed away peacefully at her home on Saturday, January 15,2022. Ruby was the beloved wife of Herbert L. Johnson and mother of Janeen C. Johnson. Ruby was born in Orangeburg, South Carolina to the late Johnny Allen Stephens and Effie Lou Johnson Stephens. As a little girl Ruby and her family migrated from South Carolina to Stamford, CT. Ruby attended several schools in Stamford, CT such as Rice School, Burdick School, Cloonan Middle School (Henry Street) and Stamford High School. Ruby met the love of her life Herbert L. Johnson, and they became united in holy matrimony in 1967. They were married for 54 years. Ruby was employed at Stamford Hospital for 41 years prior to retiring. Ruby was affectionately known as Ruby or Mae to her family and friends. If you knew Ruby, you would know that she loved to sing, and she loved her Union Baptist Church family. Ruby became a member of Union Baptist Church on May 1, 1977. During her time at Union, she was a member of the Board of Christian Education. Over the years she was also a member of several choirs such as the Voices of Deliverance, Vision 200, The Women’s Chorus, and the Sanctuary Choir. Whenever the choir had to learn a song be it for Sunday service or an upcoming event, Ruby took the rehearsal very seriously. She would play the tape every morning day and night until she learned her parts. She would say we are singing praises unto the Lord, and it must be right. She enjoyed attending Wednesday night bible study and prayer meetings. She loved the Lord and would use every opportunity in some small way to tell you about his goodness. Every morning she would listen to a sermon whether it was on television or a sermon online with Union Baptist as well as read her bible. Ruby loved to cook and spend time with her family. She would talk to her brother, sister, and sister-in-law every day if not every other day. She also enjoyed watching old television shows like Green Acres, Happy Days and Funny You Should Ask as well as partaking in a friendly conversation or two. If you met Ruby, you would be drawn to her. She had a way of making you feel loved and should always let you know that God loved you. She was a people person and embraced everyone. She never had a terrible thing to say about anyone. If someone made her upset, she would lovingly tell them “to find some traffic to play in” and then go about her day. In addition to her parents Johnny and Effie Lou, Ruby is preceded in death by her husband Herbert L. Johnson, her brother Earl Stephens, and her sister Helen R. Glenn. Ruby leaves to cherish her memories her daughter Janeen C. Johnson, Stamford, CT, her brother Rudolph Stephens, Sr., Holly Hill, SC, her brother Clifton (Sarah) Stephens, Sr., Stamford, CT, brother Carlisle (Mary Ann) Stephens, Bridgeport, CT her sister Joanne Evans, Stamford, CT, and her sister-in-law Rether Baxter, Bowman, SC. Godchildren Andre (Shanika) Glenn, Sr., New York, NY, Shante Glenn and Alicia Glenn, Vernon, NJ. As well as several nieces, nephews, and cousins. Ruby will be greatly missed by those who knew and loved her. Visitation will be held on Monday January, 24th from 10:00AM - 11:00AM followed by a service of celebration at 11:00AM at Union Baptist Church, 805 Newfield Ave. Stamford, CT. Officiating; Rev. Andre L. Bradley and Eulogist; Rev. Dr. Michael G. Christie. Interment will follow at Spring Grove Cemetery, Darien, CT.

God in his infinite wisdom called his servant Ruby M. Stephens Johnson home to be with him. She passed away peacefully at her home on Saturday, January 15,2022. Ruby was the beloved wife of Herbert L. Johnson and mother of Janeen C. Johnson.... View Obituary & Service Information

The family of Ruby M Johnson created this Life Tributes page to make it easy to share your memories.

Send flowers to the Johnson family.