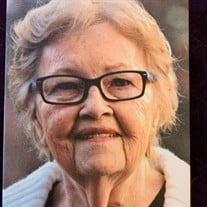 Peggy Ann Young, 85, of Stamford, CT died September 22, 2020, at her Stamford nursing home. Peggy had suffered a bad fall at home in early March and was recuperating from several broken bones when she contracted Covid-19, from which she remarkably recovered. However, she eventually succumbed to complications from liver and lung cancer. Ms. Young was born December 4, 1934, in Indianapolis, IN, to Margaret and Gale Thomas. She graduated from Broad Ripple High School in Indianapolis, IN. She continued her education at Oakland Community College in Royal Oak, MI with studies in Accounting and Business. Peggy was very active in her youth with football, baseball, swimming every summer at her family’s lake cottage in northern Indiana, babysitting and running her own paper route in an age where girls didn’t typically do such things. Peggy was artistically gifted and won several art awards for her drawings and paintings. She also loved sewing, and arts and crafts---she was always creating. She spent over a quarter century living in beautiful Sarasota near family until moving to CT 8 years ago. Peggy retired from an Accounting role at Ringling Museum and went onto a successful career selling Avon products to her Sarasota friends and neighbors, often getting around the area in her golf cart. She also volunteered her time teaching adults how to read. Peggy is survived by her loving children, Terry Trierweiler of Stamford, CT and Andy Young of Southfield, MI; Andy’s partner Raghad Kejbo; her grandchildren Kevin Trierweiler of Palm Springs and Stephanie Trierweiler of Cincinnati; her stepsons Bob Young and Michael Young of Indianapolis; as well as several nieces and nephews in the Indianapolis area. Peggy considered the greatest achievement in her life her children and grandchildren, and took great delight in being a family with close ties to one another. Peggy was preceded in death by her parents, her brothers Charles Thomas of Greenwood, IN and Ron Thomas of Sarasota FL, as well as their wives Jill Thomas and Doris Thomas, her dear friend. In lieu of an in person funeral, her children are organizing a memorial in the coming weeks via videoconferencing to celebrate her life and happy times through photos and sharing memories. If you would like the details, please contact Terry at [email protected] or Andy at [email protected]

Peggy Ann Young, 85, of Stamford, CT died September 22, 2020, at her Stamford nursing home. Peggy had suffered a bad fall at home in early March and was recuperating from several broken bones when she contracted Covid-19, from which she remarkably... View Obituary & Service Information

The family of Peggy Ann Young created this Life Tributes page to make it easy to share your memories.

Send flowers to the Young family.