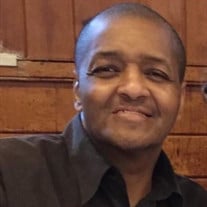 Oric Garrett Guilford was born in Stamford, Connecticut on February 23, 1964 to Oscar Guilford of Stamford, CT, and the late Jeanette Jarrett Guilford. Oric graduated from Brien McMahon High School in Norwalk, CT. Oric worked as a Sales Associate at Mr. Guilford's Fashions (his father's business) for over 30 years. Oric was known for his peaceful nature and friendly demeaner. He didn't complain or ask for much. He was a simple man and appreciated the small things in life. Family was his pride and joy. Most days he would be found taking care of his nieces and cooking for his family. Most people would have thought that he would have became a singer. He loved various genres of music. Some of his favorite artists that he listened to was Diana Ross, Barbara Streisand, Michael Jackson, Whitney Houston, and BeBe & CeCe Winans. Oric fought Leukemia for almost 5 years and passed away peacefully on January 29, 2021 at the age of 56. His memory will be treasured by his father; Oscar Guilford, Three sisters; Yolanda F. Johnson, Constance Guilford, Guilda Guilford, one brother; Val Guilford, two aunts; Glory Brinkley (James), Loretta Brinkley (late Charles), two uncles; Charles Jarrett, Wilford Jarrett, three nieces; Monique Guilford, Cherease Oliver, Carolyne Guilford, one nephew; Nagee Guilford and a host of nieces, great nephews, cousins, friends and three great nieces he raised: Bria Guilford, Dominique Guilford, and Samya Guilford. A memorial service will be held on Saturday, February 6, 2021 at 11:00AM at Graves Medley Funeral Services, 31 Stillwater Ave. Stamford, CT with Rev. Dr. Michael Christie officiating. Interment will be private.

The family of Oric Garrett Guilford created this Life Tributes page to make it easy to share your memories.

Oric Garrett Guilford was born in Stamford, Connecticut on February...

Send flowers to the Guilford family.