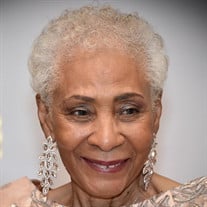 Myrtle Anderson was born in Columbia, South Carolina on October 15, 1939 she passed away on April 18, 2020. Myrtle is the 2nd eldest of 13 siblings. Myrtle graduated from C.A. Johnson High School in 1958 an was the valedictorian of her class. Myrtle's first job was at the South Carolina Mental State Hospital in Columbia South Carolina at the age of 18. Myrtle married and shortly after moved to New York City in 1960 with her husband Robert where she lived for a short period and then moved to Connecticut and raised a family of two daughters and one son whom she lost in 1987 at the age of 22. It was not long before Myrtle got a job working in the nursing field; first as a Home Health Aide and Certified Nursing Assistant, although she began her nursing career in 1985 it was almost 20 years later that she received her nursing degree as a Registered Nurse in 1976. Myrtle's lifetime dream was to become a nurse, she dedicated over 50 years to the field. During her career she served in the following nursing capacities: Home Health, Emergency Room, Geriatrics, Public Health, Psychiatric, Surgical, Staff, Occupational, and Nurse Manager. Myrtle also served on the Board of Hospice. Although, she officially retired from nursing on January 31, 2009, because of her love for the occupation and caring people, she currently does per diem work as a Occupational Nurse and conducts First Aid, CPR and AED classes as a volunteer for the American Red Cross of Connecticut. Myrtle grew up in the church and received Christ in her life at the early age 13. However, she did not come to really know Jesus and receive Him as Lord and Savior in her full life until 1999 at which time she was baptized with the Holy Spirit. Since that time, Myrtle has strived to do the will of God. Myrtle was a faithful member of Faith Tabernacle Missionary Baptist Church, in Stamford, Connecticut for over 50 years. While at Faith she served as a Sunday School Teacher, Nurse Advisor, Director of Christian Education, and most recently a Deacon. On March 14, 2009 she received her Doctrine Degree in Theology from His Excellence Theological Seminary and delivered the Valedictory speech. Her favorite scriptures were Isaiah 61:1 and Matthew 25:35-36 which she practiced to live out daily. She strongly provoked her fellow sisters and brothers in Christ to good works, and examined herself as well. Myrtle loved the Lord and His word and strived to let her light shine every day of her life. She will be truly missed by all that had the opportunity to know her. Myrtle leaves to cherish her memories; 2 daughters Theandra Thomas (Echam), Audrey M. Lyles-Thomas (Icham); 7 brothers Walter Anderson (Cheryl), James Anderson (Minnie), Stanley Anderson, Earl Anderson, Donald Anderson (Gayle), Ronald Anderson (Catherine), Alvin Dean Anderson (Kerry); 2 sisters Victoria Ingram, Ellen Jean Jacobs (Russell), 6 grandchildren, 12 great grandchildren, Brother in law James Lyles (Emma), 3 sister in laws Barbara Lyles, Mattie Johnson, Carrie Watson (Leroy); 2 adopted sisters Clarice Norman, Juachita Jackson, 1 adopted son Marvin Lewis (Ollie) 1 deceased son Robert L. Lyles, Jr., 1 deceased grandson Gerald Barstowe; deceased siblings: William Anderson, Jacqueline Harrison, Carolyn Anderson, Minnie Oliver; deceased special aunt Irene Norman; deceased step-mother Johnnie Mae Anderson and a host of adopted daughters, beloved nieces, nephews, co-workers and church family. Services entrusted to Graves Medley Funeral Services, Inc.

Myrtle Anderson was born in Columbia, South Carolina on October 15, 1939 she passed away on April 18, 2020. Myrtle is the 2nd eldest of 13 siblings. Myrtle graduated from C.A. Johnson High School in 1958 an was the valedictorian of her class.... View Obituary & Service Information

The family of Myrtle Anderson created this Life Tributes page to make it easy to share your memories.

Myrtle Anderson was born in Columbia, South Carolina on October...

Send flowers to the Anderson family.