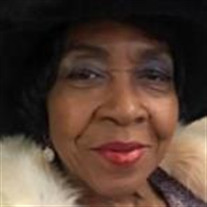 Merdis Goodine “Diva” Walker Merdis Goodine Walker, 84, of Monroe, Connecticut went home to be with the Lord on June 26, 2020. Merdis was born in Spartanburg, South Carolina on June 1, 1936 and was the daughter of Laura (Palmer) Goodine and Charles Goodine. Merdis’ father died when she was six months old and the Lord allowed her to be raised by her mother and step-father, Fred Darden, affectionately known as “Mr. Fred”. Merdis moved north to Port Jervis, Long Island when she was two years of age. Merdis’ family relocated to Port Chester, New York before settling in Stamford, Connecticut where she finished her primary and secondary education, graduating from Stamford High School in 1956. In that same year Merdis married her husband, the late Watson MacDonald Walker, and to that union were born four accomplished children. Merdis’ Christian journey began at the New Jerusalem Church of God in Christ in Stamford, CT under the leadership of Bishop Wilson. As the church grew it was renamed Wilson Memorial Church of God in Christ. Sis. Walker served faithfully under the leadership of Bishop Charles H. Brewer, Sr. She was instrumental in the Sunday School and Y.P.W.W; sang faithfully in the Heavenly Zion Choir and was a member of the Senior Usher Board. Upon the death of her mother, Merdis joined the Union Baptist Church in Stamford, Connecticut in 1989 under the leadership of Reverend Dr. Robert W. Perry where she served faithfully on the Senior Usher Ministry and the UBC Choir (often slipping out just before choir rehearsal ended at 9 p.m. on Thursday nights to watch her favorite show, Dynasty). You could also find Merdis helping out with vacation Bible school and she was always faithful in her attendance to the Bible study classes. She also was an honorary church mother at Saint James Missionary Baptist Church under the leadership of her son, the Reverend Dr. John W. Walker. Merdis held numerous jobs throughout her life some of which included working at Machlette Laboratories and Stamford Water Company, She also worked as a school bus driver and bank teller before settling in on her dream job as a head teacher at Palmer’s Hill Day Care Center. It was while at Palmer’s Hill, Merdis earned her Associates Degree in Early Childhood Education from the Norwalk Community College in 1977. Many of her students remained close to Merdis as they grew and had families of their own often returning to have Merdis teach their children too. Merdis (aka Diva) was the life of the party. Whenever she entered into the room, you knew the Diva had arrived. Merdis was predeceased by her parents, her sisters: Mary, Della, and Edna and her brothers: James, Ernest, and Eugene. Merdis is survived by her children, Wendy Perone (Gary) of Monroe, CT, Sandra Pate of West Haven, CT, Reverend Doctor John W. Walker (Margaret) of Monroe, CT , and Reverend Jace M. Walker (Patricia) of Atlanta, GA. She is also survived by her sister Rosa Mae Jamison of Wilmington, NC; her grandchildren: Lisa, Julius, Stephen, Amber, Fredrick, Choncei, Shonte’, Nala, Faith, Grace, Ronnie, Brandon, Jenna and Andrea; her great-grandchildren: Chanel, Jaz, Savanah, Seymone, Amaya, Stephen Lawrence (LJ), Josette, Jazmine, Jayquan, Jaylan, Olivia, Johnne’ Briohnna , and a host of nieces, nephews and friends. Merdis’ favorite Scripture was Psalm 121, “I will lift up mine eyes unto the hills, from whence cometh my help. My help cometh from the Lord, which made heaven and earth.” To God be the glory for the great things he has done.

The family of Mrs. Merdis Goodine Walker created this Life Tributes page to make it easy to share your memories.

Send flowers to the Walker family.