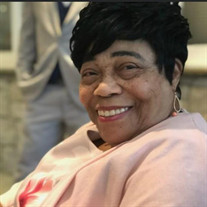 Mary Owens passed away peacefully on February 1, 2021 at the age of 79. She was born on April 2, 1941 in Carthage, North Carolina to Richard Cobb and Alice Cobb. Mary served as a Certifying Nursing Assistant for many years. Her memory will be... View Obituary & Service Information

The family of Mary Owens created this Life Tributes page to make it easy to share your memories.

Send flowers to the Owens family.