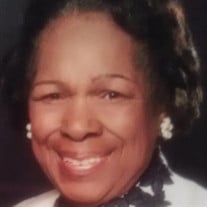 Beloved Louise Williams Thomas transitioned to glory on September 8, 2020 in Stamford, Connecticut. She was born in Washington, DC to Charlie Williams and Mary Lindsey Williams. She was raised in Pendleton, South Carolina. She attended boarding school at Allen High School in Ashville, North Carolina. She received her undergraduate degree from Allen University in Columbia, South Carolina. Following college, she began her Master’s in Education at Howard University, Washington, DC. Completing her Master’s in Education at Fairfield, CT and continuing to pursue her 6th year in Education at University of Bridgeport, Bridgeport, CT. It was there in South Carolina, while teaching, she met the love of her life, Tom J. Thomas. They were united in marriage in December of 1961. They began their life together in New Jersey where Louise taught English at Clinton Place High School in Newark, NJ. It was there in Newark, NJ they welcomed their daughter, Angela Thomas Graves, into their life. Shortly after they moved to Stamford, Connecticut began teaching at Burdick Middle School. She stayed at Burdick until closing. She continued her 39 year career with Stamford Public Schools by teaching English at Rippowam High School until its closing. Her final stop was at Stamford High School where she remained a vibrant part of the English Department until her retirement in 1996. It was at that time, Louise still continued to serve and worked with Stamford Adult & Continuing Education teaching English to those seeking their high school diploma until she officially passed the baton in 2007. Louise Thomas achieved much in her earthly life. She was a member of her beloved sorority, Delta Sigma Theta since 1954, and charter member of the Fairfield County Chapter of Delta Sigma Theta. Louise was a member of Bethel A.M.E. Church in Stamford, CT, since 1968, where she has worked with several ministries throughout her time. Her most treasured ministry was the Coalition for Mutual Respect in collaboration with Rabbi Emily, and the Jewish foundation. They raised funds to support many students’ educational tutoring and financial college assistance. Louise had a wide variety of interest. Most recently, she participated in a weekly literature class at the Darien Senior Center wherein she loved sharing her literary appetite with others. She was a world traveler, having traveled to five continents. When she was not traveling internationally, she enjoyed her time at her second home in Myrtle Beach, South Carolina. Louise’s crowning characteristics were eloquent style, literary knowledge, wisdom, her command of the English language and her incredible strength to endure. She was viewed as an amazing woman of strength, which she credits to her Faith. She was a nice blend of old and new, Louise will be greatly missed by all who knew her best. She leaves her daughter, Angela Thomas Graves, and her son-in-law, James Gregory Graves, and several nieces and nephews, friends and family to continue this amazing journey she called life. She is predeceased by her husband, Tom J. Thomas, a sister, Gloria Williams Heath, her beloved aunt, Louise Vance Martin and Grandmother, Conyers Vance Williams. There will be a public viewing on Saturday, September 12, 2020 from 9:00 am – 11:00 am at Graves Medley Funeral Services, 31 Stillwater Ave., Stamford, CT followed by a private graveside burial at Spring Grove Cemetery in Darien, CT. Due to Covid-19, a more formal celebration of her life will take place at a future date.

Beloved Louise Williams Thomas transitioned to glory on September 8, 2020 in Stamford, Connecticut. She was born in Washington, DC to Charlie Williams and Mary Lindsey Williams. She was raised in Pendleton, South Carolina. She attended boarding... View Obituary & Service Information

The family of Louise Williams Thomas created this Life Tributes page to make it easy to share your memories.

Send flowers to the Thomas family.