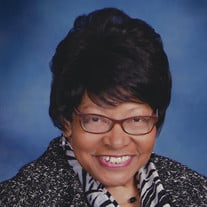 IN REMEMBRANCE AND CELEBRATION OF THE LIFE OF LORETTA JARRETT BRINKLEY Mrs. Loretta Jarrett Brinkley, a resident of Stamford and later Norwalk, Connecticut for many years, entered into Eternal Rest on February 9, 2021 at Norwalk Hospital. Mrs. Brinkley, was born in Opp, Alabama on May 5, 1949. She was the youngest child of the nine children of the late Lonnie and Florence Mullins Jarrett. Loretta completed her elementary and middle school education in the city of Opp. During the era of the1960’s, she relocated to Stamford, Connecticut where she graduated from Rippowam High School. During her adolescent teenage years, Loretta was active in various Stamford youth activities, inclusive of the Miss Americolor Connecticut Pageant in she was deemed the winner of the swimsuit contest. After graduating from high school, Loretta matriculated at the Claremont School of Business in New York City, where she developed secretarial and business management skills. Mrs. Brinkley was subsequently employed by Olin Corporation, a global manufacturer of chemical products in Stamford, Connecticut. She maintained a professional position at this firm until her retirement. Loretta’s courtship with her beloved husband Charles was initiated in 1968 after a trip to Walden, North Carolina where they attended his youngest brother Ernest’s high school graduation. Loretta was the sister-in-law of Charles’ brother James. After engaging in a romantic relationship for a period of six years, Loretta and Charles were united in Holy Matrimony on October 26, 1974, during a ceremony performed at Union Baptist Church by the Reverend Dr. Robert W. Perry. To this union of forty-six years was born one son, Chandru Edward. Throughout her lifetime, Loretta was a devout and committed Christian. During her childhood, she was baptized at the Nazareth Baptist Church in Opp, Alabama. As a youth, she participated in Sunday School Classes and the Baptist Young Peoples’ Union activities. Upon her relocation to Stamford, Connecticut, she joined the fellowship of Union Baptist Church where she rendered dedicated service for over fifty years. After Mrs. Brinkley’s retirement from the Olin Corporation, she served for many years as the Church Office Secretary and Office Manager of Union Baptist Church. She also utilized her talents and skills as the Administrative Secretary for Reverend Dr. Robert W. Perry, the Senior Pastor of the church. A faithful participant in all worship services, Loretta was also an active member of the Women’s Choir and Greeters’ Ministries. She was, additionally, a regular delegate for the Annual Connecticut State Baptist Missionary Convention. Loretta Brinkley was a cordial and congenial individual who benevolently extended herself to others. She infused joy into the lives of all whom she encountered through her warm, vibrant and effervescent personality. She lovingly embraced others with deep compassion and altruistic beneficence. The lives of others were enriched by her sincerity, infectious sense of humor and her generosity of spirit. Loretta was a devoted and loving wife, mother, sibling, aunt and cousin, who maintained a profound and abiding love for her family. She savored the quality time which she was privileged to spend with them. She reveled in the large jubilant family gatherings at which relatives were present. She also enjoyed the memorable class reunions which she and Charles attended in Weldon, North Carolina during Memorial Day weekends. Loretta also relished the memories of the glorious vacations in which she, Charles and other family members engaged in during excursions to San Juan, Puerto Rico, Nassau in the Bahamas, Bermuda, Barbados, Mexico and Niagara Falls, Canada. She also took pleasure in attending numerous family reunions which were held in Atlanta, Georgia, San Diego, California, and Las Vegas, Nevada. She also experienced delightful trips to Port Arthur, Texas, Maryland and Los Angeles, California among other locations. During her leisure hours, Loretta enjoyed writing about various topics, and typing and preparing documents, essays, letters and projects for others upon request. A culinary artist, she was noted for her creative baking skills and greatly delighted in entertaining family members at lavish dinner parties which she and Charles frequently hosted at their home during the holiday seasons. In addition to her parents, Loretta J. Brinkley was predeceased by her beloved husband, Charles Brinkley, her sister, Jeanette Jarrett Guilford, and brothers, Onivea Jarrett, Benjamin Jarrett, Milton Jarrett and Edward Jarrett. She leaves to cherish her treasured memory: one son: Chandru Brinkley of Norwalk, Ct., one stepson: Anthony Williams of San Francisco, California, one sister: Glory Brinkley(James) of Stamford, Ct., two brothers: Wilfred Jarrett (Annie) of Opp, Alabama, and Charles Jarrett (Frances) of Stamford, Ct. (A.K.A. Hassan Sharif), one brother in law: James Brinkley of Stamford, Ct. , brother and sister- in -law Charles and Mollye Fortt of Fairfield, Ct., Goddaughter: Monique Laurette Guilford of Norwalk, Ct., a niece who was like a sister: Yolanda Johnson of Norwalk, Ct. and a host of other nieces, nephews, cousins and extended family members. Memorial contributions in remembrance of. Loretta Jarrett Brinkley may be donated to: Union Baptist Church 805 Newfield Avenue Stamford, Connecticut, 06905 “ But they that wait upon the Lord shall renew their strength, they shall mount up with wings like eagles, they shall run and not be weary; and they shall walk and not faint.” Isaiah 40:31

IN REMEMBRANCE AND CELEBRATION OF THE LIFE OF LORETTA JARRETT BRINKLEY Mrs. Loretta Jarrett Brinkley, a resident of Stamford and later Norwalk, Connecticut for many years, entered into Eternal Rest on February 9, 2021 at Norwalk Hospital. Mrs.... View Obituary & Service Information

The family of Loretta Jarrett Brinkley created this Life Tributes page to make it easy to share your memories.

IN REMEMBRANCE AND CELEBRATION OF THE LIFE OF LORETTA JARRETT...

Send flowers to the Brinkley family.