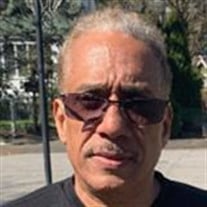 Lewis Corvair Carter entered into eternal rest on Wednesday, July 28, 2021 at his home comforted by his loved ones. He was born on February 3, 1963 in Hempstead, Long Island, New York to the late Merzialene Montgomery. At a very early age, Lewis became a resident of Norwalk, Connecticut. He continued his education in the Norwalk Public School System and attended Brien McMahon High School. He later received a high school diploma. It was at Brien McMahon High School where he met the love of his life, Patricia D. Williams. They later wed and raised three sons together. In high school, Lewis was very well known and it flowed over into his life. Lewis worked at various jobs around CT but his primary focus was warehouse management. The main two companies that Lewis spent most of his career working for were Brema, Inc. and Grape Wine Warehouse. His main goal was to provide and support his family. In Lewis’ downtime he enjoyed spending time at the park with his sons. His personal relaxing moments included watching the political and UFC channels. Lewis was fascinated by reading Stephen King Books which was one of his favorite authors. His excitement came from watching basketball and football. Lewis’ outstanding personality made those he encountered come to respect and love him. Lewis leaves behind his precious memories his loving wife of 35 years, Patricia D. Carter; four sons, Lewis V. Carter, Jr. (NaTasha) of Derby, CT; Dante A. Carter of Stratford, CT; Tarique Carter of Norwalk, CT and Joshua McCoy of Bridgeport, CT, his devoted mother Janice Carter, who raised him from an early age, eight grandchildren, Jaylen, Quincy, Jamir, Jahsias, Nazirah, Jamelah, Avantae and Brielle; six sisters Sharon Twymon (Ronald) of Alabama; Sandra White (Norwood) of Long Island; Pamlynn Tillett (Michael) of Alabama; Shaken Varnado (Troy) of NC; Patricia Wilson of VA; Celestine Collins of Maryland; three brothers Burrell Carter, Jr. of Norwalk; Stacey Carter of Norwalk and John Wilson (Sandrea) of VA. He also leaves behind a host of in-laws, nieces, nephews, family, and friends. Predeceased by his birth mother Merzialene Montgomery and his sister Valerie Keel (Curtis). Visitation will be held Friday August 6, 2021 from 10:00AM - 11:00AM followed by a service of celebration at 11:00AM at Canaan Institutional Baptist Church 31 Concord Norwalk, CT. Interment will follow at Riverside Cemetery Norwalk, CT.

Lewis Corvair Carter entered into eternal rest on Wednesday, July 28, 2021 at his home comforted by his loved ones. He was born on February 3, 1963 in Hempstead, Long Island, New York to the late Merzialene Montgomery. At a very early age,... View Obituary & Service Information

The family of Lewis Corvair Carter created this Life Tributes page to make it easy to share your memories.

Send flowers to the Carter family.