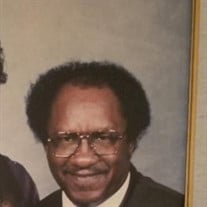 Herbert L. Johnson beloved husband of Ruby and father of Janeen, passed away peacefully Sunday, June 27, 2021. Herbert was born in Bowman, SC on March 27, 1939 to the late Marion Johnson Sr. and Maggie Kelly Johnson. Herbert attended public school in Bowman, SC. He then left South Carolina and moved to New York where he lived for several years. He then moved to Norwalk, Connecticut where he worked at Highline Boat Company and S.E.A Air. He later moved to Stamford, Connecticut where he worked at Meineke Muffler for over 20 years and retired. Herbert met and married Ruby M. Stephens Johnson. They were married for 54 years. Herbert was affectionately known as Herbie or Lee by many. He enjoyed cars, anything automotive, playing pool, watching police shows, such as Chicago PD and Law and Order SVU. He also enjoyed a good conversation or two. In addition to his parents, Herbert is preceded by his two brothers Theodore Johnson and Marion Johnson Jr. He leaves to cherish his memories his wife; Ruby M. Johnson ,daughter; Janeen Johnson, sister; Rether Baxter of Bowman, SC., godchildren; Andre Glenn, Shante Glenn ,Alicia Glenn, brothers, sister in laws, cousins, a host of nieces and nephews. Herbert will be greatly missed by those who knew and loved him. Visitation will be held on Thursday July 1, 2021 from 10:00AM - 11:00AM followed by a service of celebration at 11:00AM at Union Baptist Church, 805 Newfield Ave., Stamford, CT. officiating Rev. Dr. Robert W. Perry. Interment will follow at Spring Grove Cemetery, Darien, CT. There will not be a repast.

The family of Herbert L. Johnson created this Life Tributes page to make it easy to share your memories.

Send flowers to the Johnson family.