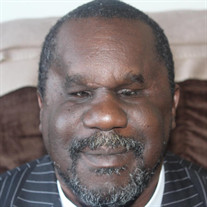 Ascending Apostle Haywood McElveen Jr. “Hayes” Haywood McElveen Jr. was born on September 30, 1961, in Norwalk, Connecticut, to the late Haywood McElveen Sr. and Everlean McElveen. At an early age, he joined Shiloh Baptist Church in Norwalk under the leadership of Rev. Julius June Fulton, where he excelled at understanding and reciting bible stories and scriptures. He attended Norwalk Public Schools and was a 1979 graduate from Brien McMahon High School. He also attended the University of Maine at Augusta. Haywood was also an avid sports fan. Although he enjoyed watching football, baseball, and other sports, his true love was the game of basketball. He played on several city league and church league teams and was also a coach. Haywood was married to the love of his life, Marion Sanford. They are the proud parents of three (3) beautiful daughters who all shared his passion for basketball. All three played well on the basketball court, and they would often spend countless hours watching the NBA, WNBA, or College games on TV together. They were inseparable, they shared their love for sports, traveled both domestically and internationally, and they served together in ministry. He also has a grandson named Kaelan who he loved and who mimicked everything his Papa did. Haywood had a great sense of humor. As a teenager, he would make his friends laugh by participating in word battles (capping), and at family gatherings, he would tell funny stories to entertain his family. He enjoyed seeing and hearing the laughter of his family and friends. In 1989, he joined Community Tabernacle of Deliverance under the leadership of Bishop Michael Densmore, where he served as a Deacon and as the Superintendent of Sunday School. In 2000, he heard the calling from God to preach the Gospel. In 2001 he, with his family by his side, founded El Shaddai Ministries. He was a respected and adored Pastor to the members of El Shaddai Ministries. He was selfless. He was always willing to help and keep them abreast of available resources. Not only did he make himself accessible to the members of his church, but he was often sought out by strangers who would ask him to pray for them or a loved one or to request counseling. His ministry went beyond the church building, he had an amazing telephone and outreach ministry. His dedication and faithfulness did not go unnoticed as he was in the process of transitioning to the position of Apostle. In addition to his wife and mother, he leaves to cherish his memories three daughters: Chalonda and Kimberly of Norwalk, CT, and Alyssa of Orlando FL. One grandson Kaelan McElveen of Norwalk, CT. One brother, Mark (Betty) McElveen of Bridgeport, CT. Two sisters, Jacqueline Hansboro of Bridgeport, CT, and Shirell McElveen-Rogers of Norwalk, CT. One brother-in-law Alan (Lajoya) Sanford of Danbury, CT. Two sisters-in-law, Juanita (Donald) Baldie of Poinciana, FL, and Sandy (Christian) Hartgens of Broomfield, Colorado as well as a host of aunts, uncles, nieces, nephews, cousins, and friends. Two brothers, Kevin "Cowboy" McElveen and Michael "Bubba" McElveen predeceased him. One of his favorite passages of scripture is from Isaiah 53:5 “But he was wounded for our transgressions, he was bruised for our iniquities, the chastisement of our peace was upon him, and with his stripes we are healed.”

The family of Apostle Haywood McElveen Jr. created this Life Tributes page to make it easy to share your memories.

Send flowers to the McElveen family.