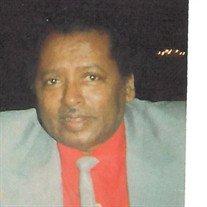 OBITUARY - FREDERICK “SONNY” DEVALDA On Tuesday, May 4, 2021, Frederick, age 93 transition into the arms of his maker peacefully at home with family by his side. He was born in Stamford, Connecticut to Ferdival DeValda, father and Lillian Watson, DeValda-Moore, mother. Upon the second marriage, he grew up under the stepfather, George Moore. He attended the Stamford Public Schools and after graduation went into the Army where he served in the 2nd World War and received an Honorable Discharge. Upon his return to Stamford, he became employed at the Rolling Mill. The name was later changed to Norma Hoffman. During his return he met the love of his life, Julia Gertrude Charlton, where the marriage lasted until her passing of 63 years. Out of this union, four sons were born, Rudolph “Rudy” Arnold “Arnie”, Leon and Andre. After retirement of 27 years from Norma Hoffman, he became an entrepreneur by purchasing an ice cream truck which he called “Sonny’s Ice Cream” and served for 24 years, He became known to many as the “Ice Cream Man.” For those who knew him, he was affectionately called, by Sonny,” “Rudy,” “Freddie” and “Candy Man”. He loved people and always like to have fun and make others comfortable around him. He liked to debate on various subjects and let it be known that he was “right.” He loved the beach. You would find him on many occasions there, sharing with old and new friends. Beside his parents who deceased before him, the following siblings pre-deceased him, Arnold DeValda, Leo Moore, Rodney Moore and Lillian “Peaches” DeValda-Richardson. Three sons, Rudolph (Rudy) Arnold (Arnie) and Leon. To cherish his memory is sons; Andre (Michele) DeValda, Bridgeport,CT and 0Brian (Trennedy) Jackson, Newark, NJ. and daugher, Rev. Velva Jean Tucker, Bridgeport, CT. Siblings; John “Johnny” Moore, Stamford, CT, Stanley Moore, Bumpass, VA, George (Lucy) Moore, Stone Mountain, GA., Mildred Winfrey, Stamford, CT. and Marva (Walter) Benjamin, Helendale, CA. Many grandchildren, great-grandchildren, nieces, nephews, cousins and other relatives. The Homegoing Service will be held on Wednesday, May 12, 2021 at Faith Tabernacle Missionary Baptist Church, 29 Grove Street, Stamford, CT at 11:00am to 12pm for the viewing and service to follow. (All protocols will be in place with masking, distancing and sanitizing).

OBITUARY - FREDERICK &#8220;SONNY&#8221; DEVALDA On Tuesday, May 4, 2021, Frederick, age 93 transition into the arms of his maker peacefully at home with family by his side. He was born in Stamford, Connecticut to Ferdival DeValda, father... View Obituary & Service Information

The family of Frederick DeValda created this Life Tributes page to make it easy to share your memories.

Send flowers to the DeValda family.