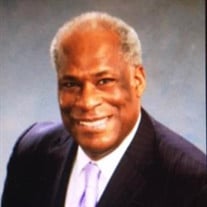 Dudley N. Williams, Jr. Dudley Williams passed on May 21, 2021, in Stamford, Connecticut, surrounded by the love and prayers of his family, friends and colleagues. in 1989, Dudley, his wife Juanita James – the love of his life – and newly born son Dudley III – the light of his life – moved to Stamford from Washington, D.C. and Brooklyn on the recommendation of close friends as a terrific community for a young family; a community on which he has had an indelible impact for more than three decades. As a passionate, dedicated and involved member of the Stamford community, Dudley worked tirelessly, often behind the scenes with a range of city leaders, nonprofits, businesses, youth and other citizens, and was committed to providing opportunity and quality of life for all of Stamford’s neighborhoods. Among the numerous community organization boards on which he served in leadership positions were The Connecticut Center for School Change, Nellie Mae Education Foundation, Ferguson Library, Childcare Learning Centers, the Rowan Center, Stamford YMCA and the Urban League of Southwestern CT. Dudley also was elected, as well as appointed, to several public and policymaking positions including the City of Stamford Boards of Education, Finance and Planning and the Connecticut State Commissions on Educational Achievement and Association of Boards of Education. And among the many awards and recognition he received for his service was the 2017 Stamford Citizen of the Year. Over his distinguished career Dudley held executive positions as a leader and strategist in business, publishing, education and philanthropy. Most recently he was the President & CEO of the Mill River Park Collaborative. Prior to that he served as Senior VP-Citizenship & Diversity for GE Asset Management, and before that was with the Connecticut State Department of Education, Simon & Schuster, Cahners Publishing and Time Inc. He also was a long-time member and steward at Bethel African Methodist Episcopal Church in Stamford. Dudley was born on November 14, 1955 in Brooklyn, N.Y., to Evelyn Carlise Porter Williams and Dudley Norman Williams, Sr. He had two siblings, an older sister Anita Cheryl Williams (deceased) and a brother Leslie Eric Williams with whom he was very close. He attended NYC public schools and Columbia University, where he majored in American History. Dudley is survived by his wife Juanita, son Dudley III, his brother Leslie (Karel), nieces Eboni Henley (TJ) and Mignon Texidor, as well as many beloved cousins and extended family. In addition to his brilliant smile that never failed to light up a room, Dudley possessed genuine warmth, compassion and amazing wit. He will be remembered for his wise, thoughtful counsel and genuine caring for family, friends and community. Due to COVID-19 restrictions, a private memorial service will be held, and the Williams family will be live streaming the service on Saturday, June 5, 2021, at 11 a.m. at dudleywilliamsjr.com/memorial. In lieu of flowers, donations may be made in his honor to the Ferguson Library, the Mill River Park Collaborative or Stamford Hospital. For additional information on Dudley, visit dudleywilliamsjr.com.

Dudley N. Williams, Jr. Dudley Williams passed on May 21, 2021, in Stamford, Connecticut, surrounded by the love and prayers of his family, friends and colleagues. in 1989, Dudley, his wife Juanita James &#8211; the love of his life &#8211;... View Obituary & Service Information

The family of Dudley N. Williams Jr. created this Life Tributes page to make it easy to share your memories.

Send flowers to the Williams family.