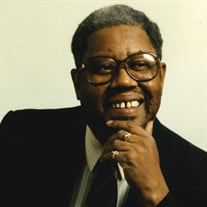 Donald E. Adams entered into his eternal life on Saturday, September 11, 2021, at home following a long illness. Donald was born on April 5, 1942, to the late Hezekiah Adams and Evelyn Simmons Adams. Donald was educated through the Stamford school system and graduated from Stamford High School in the class of 1960. Donald worked many years for Clairol Inc., in the production department and served as a supervisor. In 1994 Donald was recognized for his untiring efforts, loyalty, friendship, professionalism, and performance over the years at Clairol. Donald accepted Christ at an early age and professed his love for the Lord. Donald was very versed in scripture and could quote scripture on demand. He joined the Faith Tabernacle Missionary Baptist Church and was baptized by one of his mentors, Rev. William Lee Baxter. During Donald’s early years he served faithfully at Faith Tabernacle Missionary Baptist Church as a Junior Usher, Seniors Usher, and a member of the United Choir and many other ministries in the church. Donald worked extensively with those men and women struggling with addiction and recovery, Alcoholic Anonymous AA, Narcotics Anonymous NA, Sober House, and the Liberation House in Stamford. Donald will be truly missed by those men and women that he helped and encouraged to refrain from alcohol and drugs addiction. Donald himself suffered from alcohol addiction and had been sober since 1979. Donald was predeceased by his parents; great-grandparents Charles and Perline Bell Logan; grandparents Elliot and Julia Jamison Adams, Irving & Grace Logan Simmons; brother William (Buster) Adams. Donald leaves to cherish his memory Sister Marion (Connie) McPherson, Cincinnati Ohio; nieces Valerie Calhoun and Rae Ann Adams, great-niece Mia Calhoun; nephew Eric Adams (Vianet), great-nephew; Derick Adams, Joaquin Spruill, and Nathaniel Calhoun; sister-in-law, Sandra Adams; and, godsons Reginald Williams and Michael Streeter and many relatives and friends.

Donald E. Adams entered into his eternal life on Saturday, September 11, 2021, at home following a long illness. Donald was born on April 5, 1942, to the late Hezekiah Adams and Evelyn Simmons Adams. Donald was educated through the Stamford... View Obituary & Service Information

The family of Donald E. Adams created this Life Tributes page to make it easy to share your memories.

Send flowers to the Adams family.