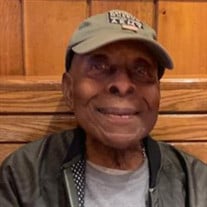 Charles Norman Roy (born Norman Charles) age 99, of Norwalk, Connecticut, passed away on Sunday February 21, 2021 at his home. Born July 18, 1921 in Norwalk, Connecticut, he was the youngest child of the late Robert and Carrie Anderson Roy. Charles served in the U.S. Army in India during WWII where he was an honorary bugle boy. After leaving the war, he went on to work at Burndy Corporation, where he was employed for over 30 years and retired. He then went on to work for the State of Connecticut where he was an emissions inspector. After leaving his State of Connecticut job, Charles went on to work at Shop Rite of Norwalk where he worked for over 25 years and retired in February, 2020. He was so loved by his Shop Rite family and customers. Charles was also a long-time member of Grace Baptist Church of Norwalk, Connecticut for over 60 years and served on the Ushers Committee. He was kind and generous in life and served others as much as he could. Charles is predeceased by his wife Saipin Sung; ex-wife Alice Johnson-Lowry (Charles N. Roy Jr’s, mother), two sisters: Dorothy Roy Mason of Norwalk, CT, Alberta Roy Deas of Paterson, NJ, and two brothers, Robert Roy of Manhattan, NY and David N. Roy of Tucson, AZ, (formerly of Norwalk). Charles is survived by his loving son, Charles N. Roy, Jr. of Norwalk, CT, two step-daughters, three step grandchildren, three step great-grandchildren and four generations of nieces and nephews. Viewing for friends and acquaintances will be at the Graves-Medley Funeral Home, 31 Stillwater Avenue in Stamford, CT on Friday February, 26nd between 10AM – 11AM. The funeral will be private (family only) due to Covid-19 restrictions.

The family of Charles Norman Roy created this Life Tributes page to make it easy to share your memories.

Send flowers to the Roy family.