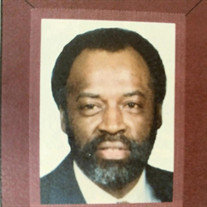 IN LOVING REMEMBRANCE AND CELEBRATION OF THE LIFE OF CHARLES EDWARD BRINKLEY Charles Edward Brinkley was born on April 11, 1943 at his original family home in South Weldon, North Carolina located in Halifax County. He was the second of five children born to the late Jimmie and Mae Beulah Jones Brinkley. He entered into Eternal Rest on Sunday, May 17, 2020. Charles was a student at Ralph J. Bunche Elementary School where he matriculated during his formative years. He graduated from Ralph J. Bunche High School in Weldon, in the class of 1961. During his high school years, Charles was noted for his recitation of poetry written by the famed poet, Paul Lawrence Dunbar. Charles was nurtured in a Christian home. He was baptized at St. Peter’s Baptist Church at eleven years of age. His entire family were loyal members of St. Peter’s Baptist Church in Weldon where he and his siblings were active members of the church and participated in Sunday School classes, the Junior Usher Board, the Baptist Young People’s Union and Vacation Bible School, among many other ministerial programs. He especially enjoyed his membership on the Junior Usher Board, a position of which he was most proud , and where he rendered valuable assistance during worship services. Charles Brinkley developed an entrepreneurial spirit early during his life. His first job was that of delivering newspapers from his bicycle on a daily basis during early mornings before school began. While in high school, he convinced his parents, after much persuasion, to allow him to purchase an automobile. During his high school years, Charles was employed as a school bus driver. His passion for driving escalated. As a result, he decided to pursue a career in transportation. During subsequent years Charles relocated to Stamford, Connecticut where his brother, James and sister Mollye had also made their homes. After being drafted into the United States Army in 1965, Charles diligently rendered service to our country as a member of the United States Armed Forces and completed an extended tour of duty in Vietnam among other military accomplishments. Charles’ dating relationship with the young and attractive Loretta Jarrett, began in 1968, after a trip to Weldon, North Carolina where they attended his youngest brother Ernest’s high school graduation. She was his brother James’ sister -in-law. After engaging in a romantic courtship for a period of six years, Charles and Loretta entered into Holy Matrimony on October 26 , 1974, during a ceremony performed at Union Baptist Church in Stamford, Connecticut , by Reverend Dr. Robert W. Perry. To this blessed union of forty-six years was born one son, Chandru Edward. Charles Brinkley joined the fellowship of Union Baptist Church in 1985. He was an active member of the church for thirty-five years. During a period of forty years, Charles Brinkley made valuable contributions as a professional employee of various trucking corporations. After his initial employment at Taylor Reed, Incorporated, he maintained his longest tenure of service at Hawk of Connecticut, where he served as a driver and was later promoted to the position of a dispatcher and terminal manager . Charles was subsequently employed at Marshall’s Express, from which he retired in 2006. Throughout his trucking transportation career, Charles engaged in numerous expeditions to New York, New Jersey, Pennsylvania, and other areas of the United States. Charles was a loving husband, father, and sibling who enjoyed the quality time which he was able to spend with his family. A sociable being, he reveled in large , jubilant family gatherings at which his siblings, nieces, nephews, cousins and other relatives were present. In addition, he excitedly attended school reunions with former classmates which took place during Memorial Day weekends in Weldon, North Carolina. In addition, he and Loretta enjoyed entertaining family members at traditional lavish dinner parties which they hosted and frequently held at their home during the holiday seasons. He found pleasure in listening to the music of James Brown, Solomon Burke, Wilson Pickett and the Jackson Five, among other artists. One of his favorite artists was Teddy Pendergrass. He additionally looked forward to the annual viewing of the renown Indianapolis Five Hundred Mile Race and the popular Daytona Beach, Florida automobile event. Baseball, football and basketball were also among his favorite sports. Charles possessed a vibrant sense of humor and enjoyed frivolity. He and Loretta greatly relished the memories of the glorious trips which they took to San Juan, Puerto Rico, Nassau in the Bahamas, Bermuda, Las Vegas, Nevada, Niagara Falls, Canada, Port Arthur, Texas and Maryland , among other locations. In addition to his parents, he was predeceased by his brothers: Purnell Brinkley and Ernest Brinkley. He leaves to cherish his treasured memory: his wife: Loretta J. Brinkley; two sons : Chandru Edward Brinkley of Norwalk, Connecticut and Anthony Williams of San Francisco, California; one brother: James Brinkley (Glory) of Stamford, Connecticut; one sister: Mollye Fortt (Charlie) of Fairfield, Connecticut ; one aunt: Mamie Jones of Brooklyn, New York; and a host of nieces, nephews, cousins, relatives, extended family members and friends. Memorial contributions in remembrance of Charles Edward Brinkley may be donated to ; Union Baptist Church 805 Newfield Avenue Stamford, Connecticut, 06905 “But they that wait upon the Lord shall renew their strength, they shall mount up with wings like eagles, they shall run, and not be weary; and they shall walk, and not faint.” Isaiah 40:31

IN LOVING REMEMBRANCE AND CELEBRATION OF THE LIFE OF CHARLES EDWARD BRINKLEY Charles Edward Brinkley was born on April 11, 1943 at his original family home in South Weldon, North Carolina located in Halifax County. He was the second... View Obituary & Service Information

The family of Charles E. Brinkley created this Life Tributes page to make it easy to share your memories.

IN LOVING REMEMBRANCE AND CELEBRATION OF THE LIFE OF CHARLES...

Send flowers to the Brinkley family.