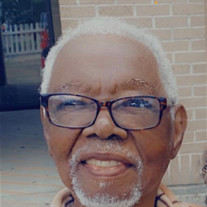 Homegoing Service for Deacon Benjamin Franklin Whittaker God, in His infinite wisdom, called Benjamin Franklin Whittaker from labor to reward on Monday January 31, 2022, at the age of 93 years old in Stamford, CT. Ben, as he was so affectionately called, was born October 7, 1928, in Liberty Hill, South Carolina to the late Hollis and Fannie Jones Whittaker. He was one of 19 siblings. Ben graduated from Jackson High School in Camden, SC. He was united in marriage to the late Betty Jean Fisher on April 5, 1951, and from that union they had one daughter, Jeannie Evonna Weathers. In 1953, Ben relocated to Stamford, CT where upon arrival he joined the Faith Tabernacle Missionary Baptist Church and was ordained as a Deacon under the leadership of the late Rev. William L. Baxter. Ben remained a dedicated Deacon until he gained his wings. Ben was a spiritual man who loved his church. Ben was employed by Raytheon until the company relocated. He then worked for the City of Stamford until he started his own business, Evie’s Laundromat & Variety Store. After the closing of Evie’s Laundromat & Variety Store, Ben took on the role of Faith Tabernacle Missionary Baptist Church caretaker until his retirement. Ben was a member of the Prince Hall Grand Chapter PHA State of Connecticut, Inc. and held various positions such as Worshipful Master St. John’s Lodge 14 (1968-1970); Worthy Patron of Dorcas Chapter of Eastern Star (1970-1971) and Most Worshipful Grand Master State of Connecticut (1983-1985). Ben enjoyed family gatherings, playing horseshoes, and hanging out in the screenhouse in the backyard of his Orchard Street home. When you did not find him there, he was around the corner at his laundromat. He also enjoyed traveling down south to visit his family as often as he could. Later in life, one of the things Ben enjoyed the most was sitting outside in the sun. There was not a sunny day that went by where he did not spend hours letting the sun shine upon him. Ben was known as the “President” of St Camillus Nursing home, and was loved, and respected by all. He loved to have a good time with his friends and family. Family members will cherish the memories of him frying fish at our many family gatherings. Ben leaves to cherish his memory, one son, Johnel (Carol) Bracey Sr. of Alexandria, VA, one brother, Deacon Joseph H. Whitaker Sr., two sisters; Winnie B. Teal and Ruth Morgan, all of Stamford, CT, Six grandchildren: Evonna Summers, Marcella Summers, Adam Weathers, Johnel (Kwisa) Bracey, Tanisha Bracey, Johnel R (Jacquelin) Bracey, and three great grandchildren: Tehya Summers Wallace, Sheriece Bracey, Alyana Bracey. He also leaves behind his brother in-law Herman Fisher of Stamford, CT, and sisters in law Charlotte Fisher Houston of Salem, VA and Mary Curtis of Tampa, FL as well as a host of nieces, nephews, other relatives, and friends. Besides his wife and parents, Ben was preceded in death by his daughter Jeannie E. Weathers, ten brothers; Andrew, Jeremiah (Jerry), Burl, David, Isaiah, Rueben, Albert, Robert, Hollis Jr. and Johnny Whittaker, and five sisters: Alice Perry, Maybell Shropshire, Silla Whittaker, Ella Whittaker, and Emma Whittaker. Visitation will be held on Monday February 7, 2022 from 9:00AM- 10:30AM followed by a service of celebration at 11:00AM at Faith Tabernacle Missionary Baptist Church, 29 Grove St., Stamford, CT. followed by Interment at Fairfield Memorial Park, Stamford, CT.

The family of Benjamin Franklin Whittaker created this Life Tributes page to make it easy to share your memories.

Send flowers to the Whittaker family.