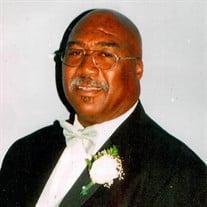 Mr. Alphonzo B. Burgess, "Big Al or Al", as he was known to many, peacefully departed this life at Greenwich Hospital on Monday, January 24, 2022, at the age of 73. He was born on December 13, 1948, in Salters, SC to the late Anthony "Bull" and Ethel "Sis" Burgess. He was married to the late Delores Green Burgess for 36 years until her passing in 2015. As a child, he moved to Connecticut and attended Stamford Public Schools. Shortly after graduating from Stamford High School, he enlisted in the US Army for six years. It was during that time he received a purple heart for his service in the Vietnam War. Once he returned to Connecticut, he worked for the City of Stamford's Public Works Department. He remained there for 28 years until his retirement. In no time he started his 3rd career as a school crossing guard until he decided to devote more time to his family. Alphonzo leaves to cherish his memories: his daughter, Terri Watson; his caretaker/cousin, "who was like his brother" Willie Mouzon Jr., two sisters; Persephone Dent and Betty Jean Boyd; five grandchildren; Tyler, Jayna, Justyn, Trystyn and Jordyn, one great-grandson; Mason, a "special daughter" Lawry Jefferson and a host of nieces, nephews, relatives and friends. A memorial will be held on Wednesday, February 2, at Graves Medley Funeral Services in Stamford, CT at 11:00 AM. The service will be live streamed via Graves Medley Facebook Page.

The family of Alphonzo B. Burgess created this Life Tributes page to make it easy to share your memories.

Send flowers to the Burgess family.