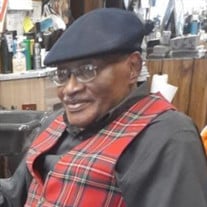 Adolphus Sherman Hampton II Adolphus Sherman Hampton II entered into eternal rest peacefully in his sleep with loved ones around him on May 8, 2022. Born on February 4, 1944, Adolphus “Dolph” Hampton was the oldest boy of nine children born to the late Adolphus Sherman Hampton Sr. and Rosa Lee Hampton in Stamford, Connecticut. Adolphus always lived in Connecticut but his heart belonged to Stamford where he was a legend in his own right for athletic prowess and being a sharp dressed man. He graduated from Stamford High school leaving behind a legacy of athletic excellence. With a degree in business from the University of Connecticut he applied that knowledge to his lengthy career in real estate leaving a wake of innovation and success in real estate transactions. He dedicated time to bowling earning many accolades and achievements. He coached numerous girls’ teams and brought one to a National Championship for the first time. Always focused on organization, he founded a softball league, WILLIMAC, with over 600 members. He was inducted into the WILLIMAC Hall of fame to honor his contribution and dedication to the sport. He was known for his kindness and caring for people and animals (especially dogs) and helped anyone who sought his assistance. He was faithful to his family and friends and enjoyed nothing more than spending time with them, playing cards, monopoly or just being with them. To cherish his memory, he leaves his sister, Dr. Jean Woods, his son, Sean Hampton, his beloved grandchildren and his nieces and nephews. He was predeceased by his parents, his daughter Tamara and son Adolphus “Kit” Hampton, III as well as sisters Joan, Sheila, Cheryl, Saundra, and brothers Drexcel, Eric and Sheldon. A memorial service will be held on Friday, May 13 at 11:00 am, at Graves Medley Funeral Home, 31 Stillwater Avenue, Stamford, CT. Live streaming via Graves Medley Funeral Services Facebook Account. Interment will be private.

The family of Adolphus Sherman Hampton II created this Life Tributes page to make it easy to share your memories.

Send flowers to the Hampton family.